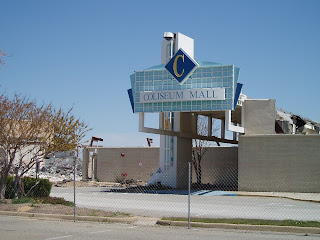 The Coliseum Mall was the first mall built on the Peninsula.  It was located right by the corner of Mercury Blvd. and I-64 in Hampton.  Though the 1970s and into the 1980s, it was "THE" place to shop in the city.
The mall was built on an empty lot that had been farm land though the early 1970s.  While looking for information on the mall's history, I found the following account of David Avery....
"The mall opened in 1973 with two anchors: Korvettes and Nachman's, which was a Peninsula-based local department store. In 1976 the mall opened a new addition, which brought JCPenney, Thalhimers, and Smith and Welton, a Norfolk-based department store.
A few years later, Nachman's merged with Rice's of Norfolk to become Rices Nachmans. The company was then sold to the Van Heusen Company. Around the same time Korvettes closed for good and the location was vacant for several years.
In 1985, Hess's Department Stores of Allentown, Pennsylvania purchased Rices Nachmans from Van Heusen. This would bring the names on the building to three, for the company was known in the area for a limited time as Hess's Rices Nachmans.
Located just down Mercury Boulevard from the mall was Montgomery Ward, in its original Hampton location at Mercury Plaza, complete with an auto outlot. The company wanted to increase the number of mall stores it had, and the former Korvettes location at Coliseum was just the ticket. Wards remodeled the store and opened at Coliseum while maintaining the Auto Center down the street at Mercury Plaza.
A short time later, Smith and Welton began having financial trouble. They closed the Coliseum store and it became a Children's Palace afterward. 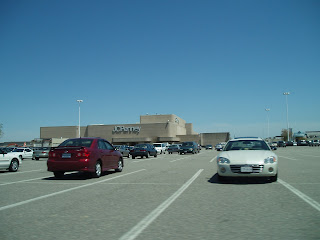 By 1988, the Montgomery Ward store had undergone another renovation; Hess's still had the vintage 1973 interior of Nachmans; and Thalhimers was suffering under the bad management of its parent company, Carter Hawley Hale stores. The store had not been remodeled at the time (or now, for that matter) since its 1976 opening. Thalhimers was sold to May Company in 1990; the next year, that division was consolidated with Hecht's, May's Arlington, Virginia, division. JCPenney, at least, attempted to stay with the times.
A few years later, Hess's was in clear trouble from the massive expansion resulting in part from the company's purchase by the Crown American Corporation, which was placing a Hess's in every mall they were building. While other stores in the chain were sold to May Company and to The Bon Ton, the Hampton Roads and Peninsula area stores were sold to Proffitt's. In turn, Proffitt's realized that this was not a salable move, and sold the stores to Dillard's.
By the time Dillard's entered the mall, Children's Palace was gone and the company decided to take that store as well as the original Rices Nachmans-Hess's-Proffitt's. As Proffitt's had realized before, the move to Coliseum was not profitable, and the stores were closed as well as the Dillard acquisition at Pembroke Mall in Virginia Beach.
The Montgomery Ward closed when the company went bankrupt. This left Coliseum with one traditional department store, Hecht's, that was markedly different from the area's other stores. JCPenney was there as well, but could hardly be considered a fashion department store.

Anyone knows when a Burlington Coat Factory comes to an enclosed mall, it is almost the death knell. 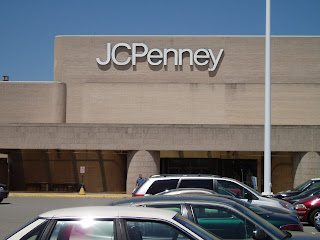 What went wrong? It's hard to say, although the mere layout of Coliseum's parking lot made it almost unreachable in traffic. I distinctly remember an ambulance trying to reach a heart attack victim in the mall in December 1988, and not being able to reach the mall due to the traffic. The changing demographics of the area certainly haven't helped. But perhaps the biggest hurdle as of late is the perpetual construction of the intersection where the mall is located: West Mercury Boulevard at Interstate 64. This intersection was already a bottleneck, and the expansion which was to improve it has only hindered it. Additionally, there are safer malls to get to with cleaner stores within a reasonable, easier driving distance."
In my opinion, the mall became very dirty and broken down.  The faucets in the bathrooms began to fall apart, there was graffiti in places, and it just didn't feel safe.  I believe this led to the loss of customers to the newer/nicer Patrick Henry Mall in Newport News and MacArthur Center in Norfolk.  The buyout of Hecht's in 2006 by Macy's did little to help matters.  In 2007, the mall (with the exception of Macy's) closed and torn down.  In 2009, the new Peninsula Town Center was opened after two years construction on the former mall site.  While the new Town Center is a wonderful addition to the city, I personally miss the postmodern style of the old Coliseum Mall. 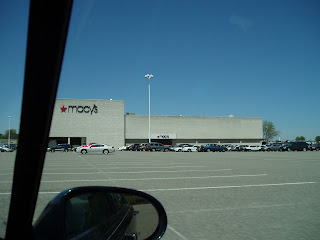 Don't forget the part that Patrick Henry and Macartur Mall had in drawing customers away from Colosseum Mall. In the end CM had trouble drawing and keeping upscale stores, thus catered to shoe stores and urban apparel shops. I like the new look but wish they had kept the Colosseum name rather than Peninsula Town Center, not to be confused with City Center or Town Center in VB

I remember when I was about 6 or 7 (1976-7) the inside of the mall had big orange tiles on the floor and a fountain about where the food court was. There was no food court then but had an movie theater in its place (where I first saw Star Wars in '77) anyway the fountain had large geometric architectural features but no wall around it. I fell in! My father was soooo embarrassed, leading a soaking wet child with a water trail out of the mall. I don't remember but I bet the car was all the way on the other side of the mall.

That is an awesome memory, Sean.

Buy and sell new and used modern, outdoor, office, bedroom and home furniture.
Choose from a great selection of gently used furniture for every room in your home.
More here used furniture

When I lived in Hampton in 1999-2001, I would go to the Dairy Queen in the. Coliseum Mall food court. Every single time the owner made my Dairy Queen Blizzard, he would turn it upside down and shake it without the lid, just to show you how well it was made. I've never had anyone else do this at any other Dairy Queen I've been to in the US. We'll, that's my Colosseum Mall story